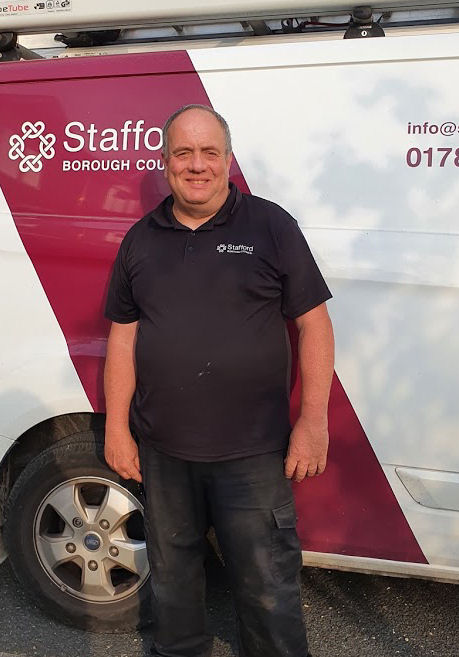 Meet Paul Bowen. A streetscene operative for Stafford Borough Council with a massively strong work ethic. He’s turned his hand to many jobs during his 17 years working at the council – and he was very much a key worker during the pandemic. While many of our heroes have been managing teams of people Paul has literally been out on his own on the frontline everyday – on the streets, in the parks, the crematorium and the bowling green.

Paul is currently seconded to pest control, after completing the two year pest control training course (and grueling three hour exam), and now deals with everything from bedbugs and cockroaches to wasps and mice. He’d just got back from a recent home visit, with an environmental health officer, to a lady’s house where there was a rat infestation problem. As Paul says, “My advice to the lady, who’s partially blind, was to stop feeding the birds – she didn’t realise that the rats were enjoying the food too!”

At the weekend Paul is on street cleaning duty in the town of Stone as well as in the parks. It was especially bad, just before the pubs could re-open and in the spell of warm weather, with large groups of people gathering in parks to drink instead. This resulted in lots of extra litter and broken glass in the parks and on football pitches, which took Paul hours to clean up. As Paul says, “I wish people would take more responsibility and clear up after themselves.”

But that’s not all Paul has been doing. After normal working hours he’s been spending the evenings raking out ashes at the crematorium, which has been busier with the additional Covid-19 deaths – this meant he often didn’t finish work until 9pm. He is now on standby to help with this again if there is a second wave.

Despite this rather full to bursting worklife Paul’s first love is the bowling green, which is where he started off with Stafford Borough Council. And it seems Paul is quite the expert. He completed a four year course in Turf Science, and that was after other courses in landscape and amenity horticulture. Stafford Borough Council must be one of the only councils running, not one, but five bowling greens directly and it’s Paul’s passion to ensure they are top notch. He’s recently spent a weekend watering one at Rowley Park to save it after the hot weather and ensure the condition is suitable for play, now that the facilities are back open again.

Paul’s success and job satisfaction seems to be due to his commitment and flexibility. In the early days of lockdown many staff were absent due to self isolation so Paul knew that work would be a lot busier for him, yet he seems to have thrived. What he hadn’t expected was all the thanks he received from residents. For example the beauty spots have been really popular with residents and when Paul has been emptying the dog waste bins, which were fuller than ever because everyone was walking their dogs more, people have been stopping him to say thanks. As Paul says, “They have been pleased to see me. Public appreciation has really grown through lockdown.”

Paul’s appreciated the feedback from residents

Paul appreciates the positive feedback and knows what he does is worthwhile and makes a difference. He says he feels like his own boss yet he is quick to praise his manager, Mick, and his supervisor Ian too.

Would Paul encourage others to work in the council sector? Absolutely. He says, “As long as people are prepared for change. This isn’t a job for life anymore, you get out of it what you put in.”

To relax Paul builds “electronic things” and is a radio amateur – he also knows Morse code. His wife works for the Police and during lockdown his eldest daughter, who’d been doing a teaching course at College and then studying at home, has been homeschooling his lad of 13 and she is doing a really good job!